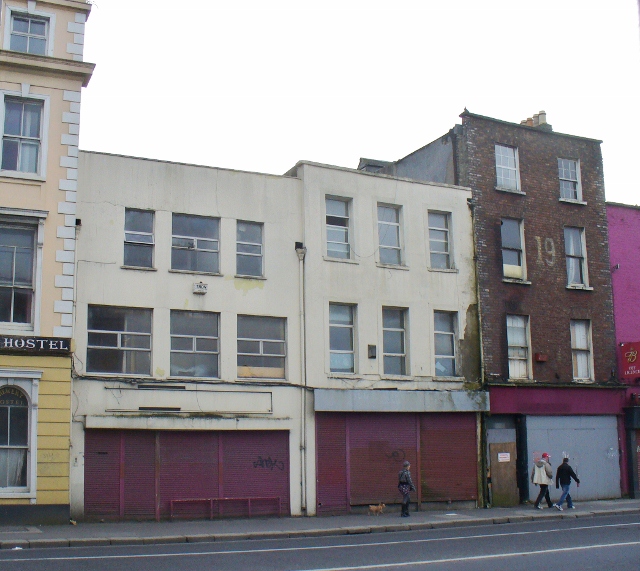 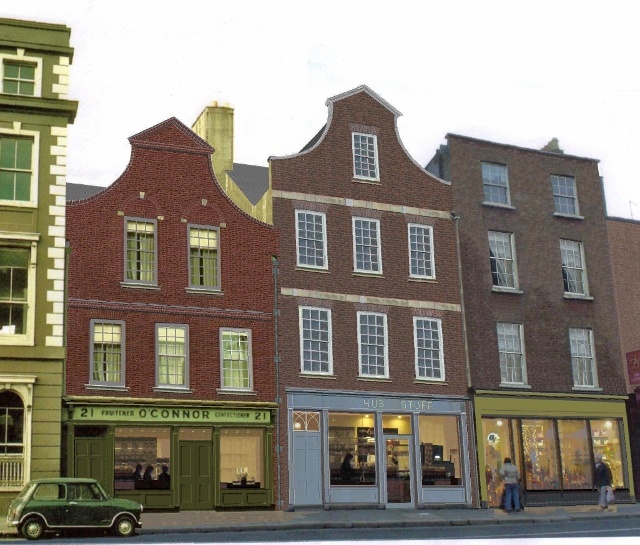 Hack the City was an initiative of the Science Gallery Dublin to ‘re-purpose” existing urban assets in new, creative ways. It was an open brief for interpretation. We put together the draft proposal and gathered a team of diverse , talented people to deliver it focusing on 2 buildings 20-21 Thomas Street , former 18th Century Merchant houses. Valuable earlier research had been carried out on 20-21 Thomas Street Dutch Billies by architect Peter Keenahan and he generated the reinstatement drawings and images.

While unsuccessful in the competition, the momentum of the core team team continued and research into the content by architect Katya Samodurova and delivery of the exhibition continued. The Dublin Civic Trust completed it’s report on the Street and was instrumental in bringing the conservation professionals to the site.  One invaluable offshoot for the street was the  Thomas Street Stakeholder Forum which is currently evolving a collective strategy for improving the street and is facilitated by Killian O Higgins.

The aim is understand the value and contribution of the ‘everyday’ historic street buildings of the city, and showcase innovative technologies in adapting historic buildings for creative new uses (as demonstrated through restoration by Dublin Civic Trust over the past twenty years.)

The proposal consists of the following:

VENUE: Installation of a contemporary  Pop Up venue within the former shop in number 20, housing 3 wall multi-media projections housing exhibition, presentation and workshops space. The focus will be on the science and creative process involved in Regeneration.Designed to be a visitor and local attraction on EAST-WEST City Axis (as currently under development by Fáilte Ireland and instigated by Dublin Civic Trust.)

This will be designed and curated by Designer, Architect Frank Hughes and Architectural Historian Graham Hickey of the Dublin Civic Trust with input from our key Digital and Regeneration partners.

DIASPORA TREASURE TRAIL: This web and real world trail focused on this quarter of Dublin will be designed to engage the global diaspora and resident Irish community to solve key clues relating to key technologies and innovations developed by people of Irish descent all over the world spanning 4 centuries .It will be designed as an interactive web support to the ‘Gathering’ –  diaspora project for 2013 run by the Tourism Board.

This will be designed by the Core Team with input from key Digital and Scientific partners. Prizes of family trips , internships with Digital Companies, Start Up Mentoring and Educational placements will be offered. Different age group categories and schools etc will engage with multi channel communications campaign.

KEY ISSUES:  Regenerating and redesigning historic city quarters and buildings. The pivotal design processes involved and successful international models to learn from will be explored in the venue and online. These will  use a mix of digital media, animation and simulation, workshops and thematic exhibitions.

KEY PROCESSES TO BE EXPLORED IN VENUE, WEBSITE & BLOGS – using multimedia and artefacts. These will be designed and facilitated with key practitioners within their respective fields. These will be curated by the Dublin Civic Trust Team, The Digital Hub , International  Property Consultant Killian O’Higgins and our extended partners.

Historic Context and Importance of No. 20 and No. 21

No. 20 and No. 21 are located at the western end of Thomas Street in the historic Liberties area of Dublin 8, comprising a central component of a terrace of historic buildings owned and managed by the Digital Hub Development Agency. In spite of unassuming appearances to the street, remarkably, the pair of houses are a nationally significant pair of early 18th century formerly gable-fronted houses of the Dutch-gabled tradition of pre-Georgian Dublin, of which relatively few survive in the city, and of which not one survives intact with an original gable fronting the street. No. 20 dates to c. 1730 and No. 21 to c. 1700-20.

They are an architectural typology of house that dominated prior to and overlapping with the Georgian expansion of Dublin, during which entire streets  were developed as decorative gable-topped brick houses for approximately the century 1650-1750. Once gables become unfashionable after this date, gables were built up, built over, or the attic storey demolished entirely. As such, No. 20 and No. 21 present a fascinating story of ‘hidden heritage’ waiting to be uncovered.

Although currently in an advanced state of disrepair, No. 20 and No. 21 are eminently restorable back to their original condition, with many historic elements still intact, including substantial structural fabric of masonry and timber, staircases and some decorative joinery and plasterwork. These properties represent a unique national architectural heritage opportunity to reinstate a grouping of gable-fronted houses back to their original streetscape appearance and interior layout and decoration, as well as serve as a catalyst for regeneration along the western stretch of Thomas Street, and as a cultural attraction of considerable architectural significance and distinction.

The houses are located in an incredibly rich historic district, sited along the ancient route into Dublin, the great Slighe Mór, which later became St. Thomas Street. As the original Viking settlement of Dublin grew into a fortified medieval town, St. Thomas Street became the main street of The Liberties, an ecclesiastical and later mercantile district located outside of the city walls and hence not subject to the jurisdiction of the city. To this day, The Liberties retains a very distinctive identity and a curious sense of detachment from the main city centre to the east.

As Dublin expanded and developed through the 18th and 19th centuries, Thomas Street evolved into an important commercial and industrial thoroughfare, lined with merchant houses, shops and institutions. Silk weaving, the linen industry, tanning and porcelain making, religious institutions and hospitals were all prominent stakeholders in the area. Likewise, breweries and distilleries had a fundamental role to play in Thomas Street’s economic prominence, including Roe’s and Power’s distilleries and the great Guinness brewery, giving the area a defining sense of purpose and character within the wider city.

This layered and complex history of innovation, adaptation, mercantile creativity and urban living has a remarkable story to tell for the hundreds of thousands of visitors who frequent the Guinness Storehouse adjacent to No. 20 and No. 21. There is enormous potential to harness this audience to effect real and lasting regenerative change in this, the most historic and characterful district in Dublin.

Relevance of the built fabric of the City Quarter

Urban Design as an Integrated process

Energy and Infrastructure – The Future

Merchant houses were the staple LIVE / WORK urban street unit for at least the past four centuries in Dublin, representing the prominence and outward looking stylistic influences of the second city of the British Empire. Such housing also represented the innovations and craft of the day in use of brick, glass, heating, water provision and construction materials.

These simple and elegant buildings have served the city and street over four centuries, adapting to new circumstances and now have a new role as prototypes for the future. Using advances in technologies and materials, their restoration and re-purposing will be explored as models for restoration and reuse historic street fabric for the 21st Century.

Plotting a Future for Historic Street Buildings and their Regeneration