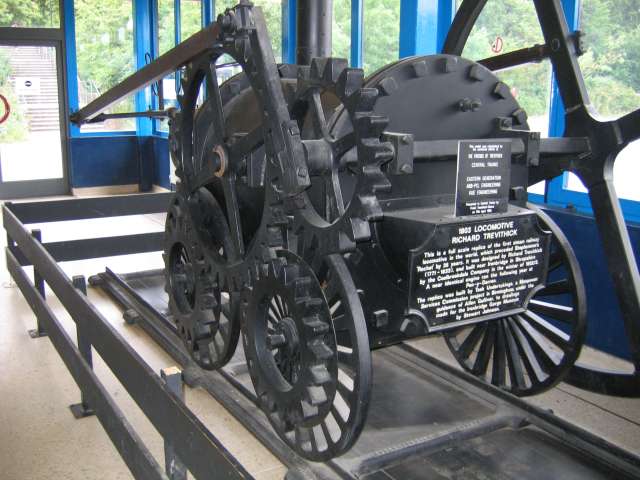 This model was refurbished by the combined efforts of:
THE FRIENDS OF TREVITHICK CENTRAL TRAINS
EASTERN GENERATION
ABB-PCL ENGINEERING
KUE ENGINEERING
Presented to Central Trains by
Frank Trevithick-Okuno
on 17th April 1998.

This is a full scale replica of the first steam railway locomotive in the world, which preceded Stephenson’s ‘Rocket’ by 26 years. It was designed by Richard Trevithick (1771-1833), and built near Ironbridge in Shropshire by the Coalbrookdale Company in the winter of 1802/3.
A near identical engine ran the following year at Pen-y-Darren.

The replica was built by Task Undertakings, a Manpower Services Commission project in Birmingham, under the guidance of Allen Gulliver, to drawings made for the Ironbridge Gorge Museum
by Stewart Johnson.